Does a Good Guy Need a Uniform to be considered a good guy? 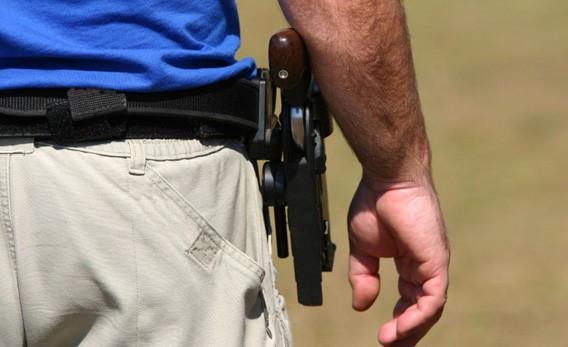 Early in 2017, 27-year-old Trooper Ed Andersson was called to the scene of an accident. Upon arriving and witnessing an overturned car, he began to block off the road and set up road flares as he had done a dozen times before. That’s when a bullet struck him in the chest. Before he had a chance to even to process what had happened, the assailant was on top of him. Severely weakened from the gunshot wound, the Trooper could put up little resistance as his head was repeatedly slammed, again and again, into the concrete. Andersson had to have believed that this is how he would die - until he heard the voice of another man. Someone was offering him help. Seconds later, the assailant was dead on the ground from the bullet of a good Samaritan’s gun, and Andersson was receiving first aid from his savior's wife. Two people with the fortitude to confront evil, and the strength and ability to do what was necessary - saved that Troopers life.

"We did what we had to do. ... God put us in the right place at the right time." The Samaritan said.

In this case, by our society’s definition, which person was the good guy? In my opinion, they both are. A good guy in uniform was helped by a good guy without one. So, do good guys need a uniform at all? The answer is: yes and no.

Our uniforms serve as symbols.

There's a reason that those who have taken up the burden of service are asked to distinguish themselves further through specific clothing and mannerisms as they interact with the general public. Part of it is for show, for both the viewer and wearer; in a uniform you become a symbol of something greater. A uniform shows the world that this place is protected -from violence, from fire, from anyone or anything that would seek to do it harm. It also reminds the wearer of they role they are expected to play - it helps steel the mind. Most who have worn a uniform whether military, police, fire or paramedic can attest to the psychological shift that occurs as soon as you put it on. Your training, your honor, it remembers those clothes. These symbols are also reinforced in public, for better or worse, through the media and the stories we are inundated with. With all of this history and symbolism surrounding our uniforms, it's hard to forget that they don’t actually do anything. They are simply clothes. They don’t make someone strong or brave. Yes, they represent a significant number of things - but it is man or women who chose to put one on that makes these symbols real. Many of the good guys wear a uniform, but that isn’t what makes them good, and it isn’t the only way one can be one of the “Good Guys.”

The United States, at its core, was founded on the principles of self-responsibility. Most of our history has relied on individuals taking destiny upon themselves, and it is only much later that the government followed suit (and in many cases took credit.) From our founding in the eighteenth century, to the Texan settlers who took up arms against Mexico, all the way to the McMinn County War, our history is written by great people who didn’t wait for permission to do what they knew was right. We’d be fools to think this underlying truth has changed. Men and Women in uniform stand on the wall that holds back the chaos that threatens to overwhelm civilization - but it is the unsung support and will of our countrymen that ensure that this wall will never crack. That this wall remains strong. That this wall protects something worth protecting.

Our Strength Comes from our Citizens

Let’s talk about public safety and how it relates to this topic. We are an armed nation. Millions have chosen the responsibility that comes with owning a weapon - and they have proven time and again that a “good guy” can very often be one who's never worn a uniform. Almost three times as many dangerous criminals are killed by an armed citizen[1] each year than are killed by police (some of this may have to do with Police training in de-escalation, but it still shows the power of a responsible citizenry.) According to compiled FBI data, most active shooter situations end after the shooter chooses to stop - 30% of these situations were stopped by police, while motivated civilians stopped 13%. So around 25% of all resolved violent situations were resolved by civilians who took the situation upon themselves. It's estimated that armed civilians stop over 6,500 criminal incidents a day[2].

It's not just police services that are significantly augmented by the good samaritan nature of our communities. Nearly 70% of our country’s firefighters are volunteers. Mounted patrols help search thousands of acres of land. Even simply putting AED’s in the workplace has saved numerous lives.

Time and again our countrymen have stepped up to take on the burden of protection - even when no one expected them to. Though, dare I say, that isn’t entirely accurate - When you’re one of the good guys - YOU expect it of yourself.

So who are the Good Guys?

WE are; that is, those of us with the fortitude to put ourselves in harms way to protect the lives and well being of others. It’s not the clothes you wear or the organization you represent - it simply whether or not you have what it takes to take appropriate action; to do the right thing, when the time comes. Good guys fight, prepare to fight, and live a vigilant lifestyle to protect us, each other, our communities, and our country from those who would do harm. From crime. From evil. From Tyranny.

And upon this premise, that we the people are the good guys, our small company has been founded. We are here to make it easy for the good guys. Doing good does not just fall upon those of us who have served or who still serve in the military, police, fire service, or an ambulance company. Our business focuses on the first responder, a title that is used a lot lately to describe public safety employees, but it means all of us who are there first and are ready to do good when necessary.