Why You Need to Carry Tourniquets 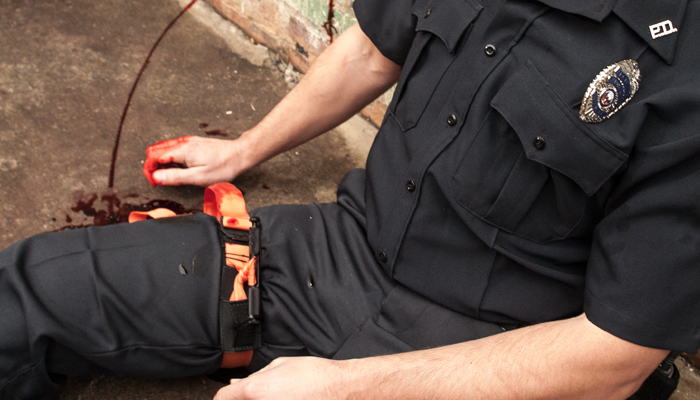 Though tourniquets have been used to treat violent wounds as far back as the Roman Empire, there persist many misconceptions about their proper use. Too many still believe that tourniquets are a last resort item or that the use of one will result in eventual amputation. Many of these false beliefs stem from medical practices during World War I and II (we will get into these later in the article) The truth is, that tourniquets have seen wider and wider use in immediate application across the board. Roughly 50% of all combat deaths since World War 2 can be attributed to blood loss, and many are realizing in hindsight that proper tourniquets could have saved a significant percentage of those. They are so valuable that some new combat uniforms even incorporate tourniquets into the design!

Today most military members and EMTs are well aware of the importance of carrying a tourniquet and when to apply it, but this knowledge has been slow to permeate through to other uniformed professions who put themselves in harm's way. Myths and misplaced fears regarding tourniquets abound, even amongst those who could benefit from them the most.

In applying both buddy aid or self-aid, the tourniquet is an integral part of the medical tool chest, and I cannot stress enough how important it is that you learn the truth about their importance in saving lives. If you are reading this article on our website, it is likely that you already know that making the right choice, and carrying the right life-saving gear, can make all the difference in whether you or a buddy make it home at the end of the shift or deployment - and I’m here to make sure you understand the right gear is often a tourniquet.

A Quick History of the Tourniquet and the Myths that Surround it.

“The use of a tourniquet went from a means of last resort to a means of first aid and so became the prehospital medical breakthrough of the wars in Afghanistan and Iraq.”

-Tragedy Into Drama: An American History of Tourniquet Use in the Current War As far back as Ancient Greeks, you can find descriptions of bands that were tightened to slow blood loss. The first significant advancement in the technology came when Etienne Morel used a tourniquet with a stick to turn and tighten its constricting bands in the Battle of Flanders in 1674. Their method is still taught today.

Soldiers on both sides of the Civil War were encouraged to carry supplies with which to make tourniquets, and the devices saved many lives. Inadequate training, however, led to their misuse at times, and the some of the negative myths around the devices began.

Most of the negative reputation around tourniquets came from battlefield reports during the two World Wars. Most of these adverse reports and studies have now been proven mostly anecdotal, and their reported clinical outcomes are likely not from tourniquet use, but rather a multitude of other variables. Another reason for their negative reputation during these wars were unsound practices and designs. The idea popularized at the time that the tourniquet should be loosened every 20-30 minutes is outright false and was found to result in greater bleeding.

The poor reporting on tourniquets following the war led to many misconceptions that lasted well into the current generation. One of the major misconceptions is that use of a tourniquet should be a last resort since it can lead to amputation. In actually, tourniquets can usually be left for at least to 2 hours without permanent complications, and up to 6 hours before total muscle damage requiring amputation would result. Some reports from remote battlefields suggest this timeline is even longer.

I want to repeat this one more time - Tourniquets can usually be used safely FOR AT LEAST 2 HOURSwithout risking permanent complications. When you are in an emergency situation, and someone is losing blood, the fear of permanent limb damage resulting from the tourniquet becomes absurd. Use the tourniquet! Following several soldiers bleeding to death in Mogadishu in 1993 (made famous in the book and movie Black Hawk Down) Rangers and special operations soldiers began carrying tourniquets with them at all times, and major studies on their use were conducted. In 2003, following lessons learned from the Iraq and Afghan wars, combat surgeons urged the military to make the tourniquet a standard item in all military first aid kits.

After the implementation of the U.S. Military Tactical Combat Casualty Care Committee guidelines for tourniquet use, a huge decrease in combat deaths due to external hemorrhage occurred. Despite this increased knowledge of their benefits, the police and the civilian communities have still been slow to adopt tourniquets.

You Need to Carry One (or Three…)

Tourniquets are highly recommended for SWAT teams, medics, patrol officers or anyone expecting a dangerous tactical situation. Threats that are commonplace these days can cause massive amounts of trauma to extremities.

In high-risk situations, you likely will have to rely on your equipment and training, especially when traditional EMS services cannot easily or quickly reach you. Modern tourniquets can easily be applied to yourself and others and will save a life if used swiftly and correctly. Their use by the military in combat gives us valuable insight into further utilization on the homefront. Not having tourniquets with you when needed puts you at a distinct disadvantage when faced with injury or challenging patients.

The Right Tourniquet for the Job

There are so many, how do you know which to choose? In general, there are a few common rules: a wider tourniquet is more efficient at stopping blood flow than a narrow one with the same pressure. Larger limbs with a larger circumference require more tension, thus making a variability in pressure key for an effective tourniquet.

Not all tourniquets are created equal. While each one is suited for a given situation, you should know what type you should carry for the situation and wounds you and those you work with are most likely going to face.

Here are some links to the most popular (and most useful) tourniquets:

Across the globe militaries and emergency personnel have adopted the C-A-T tourniquet. It went into production in 2005 and has been deemed by the Army Institute of Research to be 100% effective. It can be applied with one hand quickly and easily.

High-strength and lightweight, the SOF Tactical Tourniquet is carried by a number of elite units and agencies for its ability to stop even the most severe bleeding.

The Windlass tourniquet takes a couple of extra steps to apply, but the additional straps allow it to be held into place - be wound up to 200 lbs of pressure. This is useful if you are treating a larger or more muscular individual, or a more severe wound, and need to apply a significant amount of pressure.

Designed by former special operations warfighters and proven in combat service for almost a decade. The MET Gen III provides a one-handed application that is easy to apply and stays in place. As a true open-loop system, this tourniquet comes apart completely to place around a limb and doesn’t need to be fully cinched down before engaging the windlass.

Small, light, and efficient, this strap allows for a single hand application while simultaneously allowing you to apply extreme pressure. The tension fixture adds the ability to use manual force along with the wrapping to increase the blood loss stoppage capability.

A compression strap is ideal for applying direct pressure over a wound or for creating pressure on an extremity to reduce blood loss. The TK-4 has been deployed by the US Marine Corps, US Special Forces, and numerous law enforcement and emergency services as a quick way to control severe hemorrhaging while minimizing size and weight. No matter which type from the list above, or others that are available that aren’t listed here, it is my sincere hope that this quick guide at least helps you decide that you should carry tourniquets on duty and definitely seek training in how to use them. We know this is a newer topic for many and look forward to helping you with any question you might have. Our company is staffed with serving police officers and military veterans (heck, most of us are both!) – do not hesitate to contact Nelson & Co today. We are here to make it easy.